On May 5 and 6, the G71 environment ministers gathered in France to discuss pressing needs, and then issued a statement in the context of “fighting inequalities by protecting biodiversity and climate.” Among the 52 actions highlighted in their 12-page report, a few have direct relevance to The Oceanography Society. Words used most frequently in the declaration include biodiversity (49 instances), sustainable (42), and climate (33). Way down that list are key words that relate directly to TOS—ocean (15) and marine (14). The G7 ministers “emphasize the need to address the different ways in which climate change and environmental degradation affect territories, oceans and seas, activities and people,” so at least the ocean was included. And the G7 are committed to improving and sharing the latest state-of-the art knowledge regarding the ecological state of the ocean, to boosting ocean awareness and literacy, and to ensuring that existing and new anthropogenic pressures are reduced and do not threaten the health of the ocean. 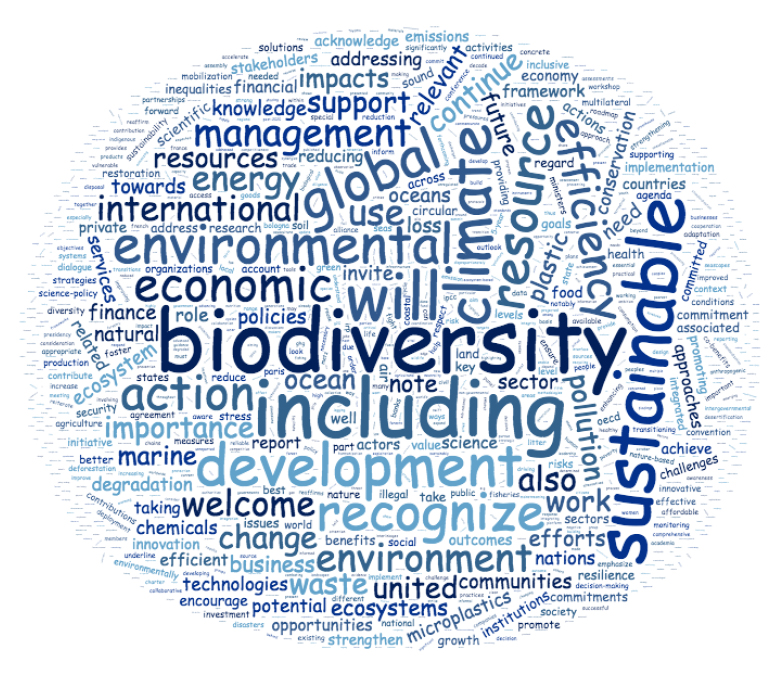 In this respect, we welcome the G7 Initiative on Earth Observation and Integrated Coastal Zone Management as well as the work by the G7 Future of the Seas and Oceans Working Group and its efforts to establish an Ocean Observation Coordination Centre to strengthen collaboration, including with the Global Ocean Observing System (GOOS). We invite the Working Group to support preparations for and activities under the UN Decade of Ocean Science for Sustainable Development (2021–2030). “The ocean we need for the future we want!” decadal proposal aims to gather stakeholders worldwide behind a common framework to ensure that ocean science can fully support countries in creating improved conditions for the conservation and sustainable use of the ocean, seas, and marine resources. So, here you go fellow TOS members, we have work to do!

Two months earlier, on March 6, 2019, Prime Minister Shinzo Abe of Japan received the Joint Statement by Science20 (S20) as part of this year’s G202 process. The executive summary begins with: “A healthy coastal and marine environment is essential for the ongoing sustainable development of human society. The ocean is a large absorber of atmospheric heat and carbon dioxide, and provides a vital buffer against anthropogenic climate change. The ocean contributes to human well-being in many ways, such as providing protein from fisheries, maintaining various natural cycles and is also a source of recreation and spiritual comfort. However, coastal and marine ecosystems are also facing serious threats.” The five-page document uses the word ocean 42 times, followed by marine (32) and other keywords such as plastic (22), ecosystem (13), carbon (11), and climate (10). To my knowledge, it is the first time that the G20 process has taken note of the ocean and, more remarkable, that under the Japanese leadership the only topic the science track under G20 addressed this year was the ocean. That is excellent news, because the G20 group is much more inclusive than the G7 and speaks better to the broad, global membership of TOS. Statements like those should give us hope that the science we do is increasingly recognized and supported by different policy groups around the world. 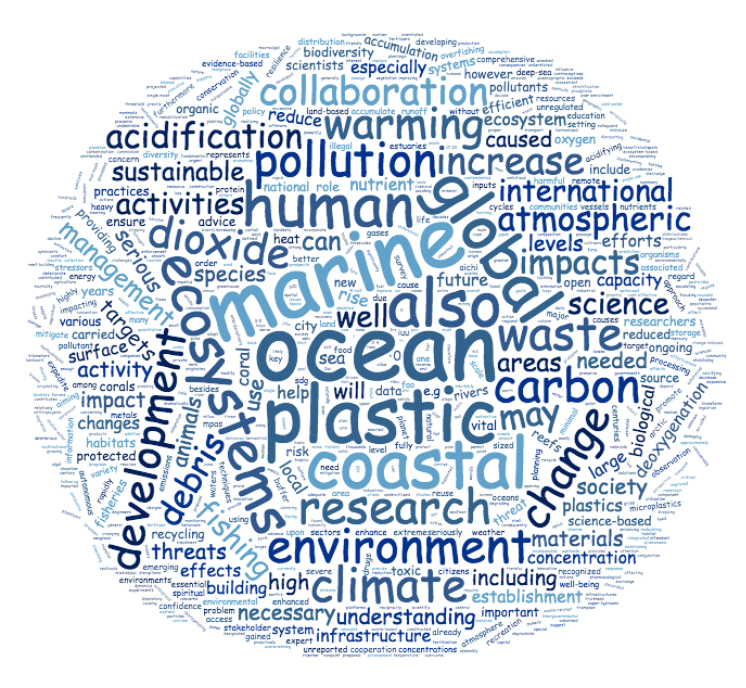 Finally, on May 6 the Intergovernmental Science-Policy Platform on Biodiversity and Ecosystem Services (IPBES) released its major report. The top three words found in the 30 pages of tightly spaced text are nature (52), change (43), and biodiversity (39), and when adding oceans and ocean together, we have a respectable (27). The report says: “Nature across most of the globe has now been significantly altered by multiple human drivers, with the great majority of indicators of ecosystems and biodiversity showing rapid decline. Seventy-five per cent of the land surface is significantly altered, 66 per cent of the ocean area is experiencing increasing cumulative impacts, and over 85 per cent of wetlands (area) has been lost.” But the report provides directions for future work. “Sustaining and conserving fisheries and marine species and ecosystems can be achieved through a coordinated mix of interventions on land, in fresh­water and in the oceans, including multilevel coordination across stakeholders on the use of open oceans.” And, “Ensuring sustainable food production from the oceans while protecting biodiversity entails policy action to apply sustainable ecosystem approaches to fisheries management, spatial planning (including the implementation and expansion of marine protected areas) and, more broadly, to address drivers such as climate change and pollution.” 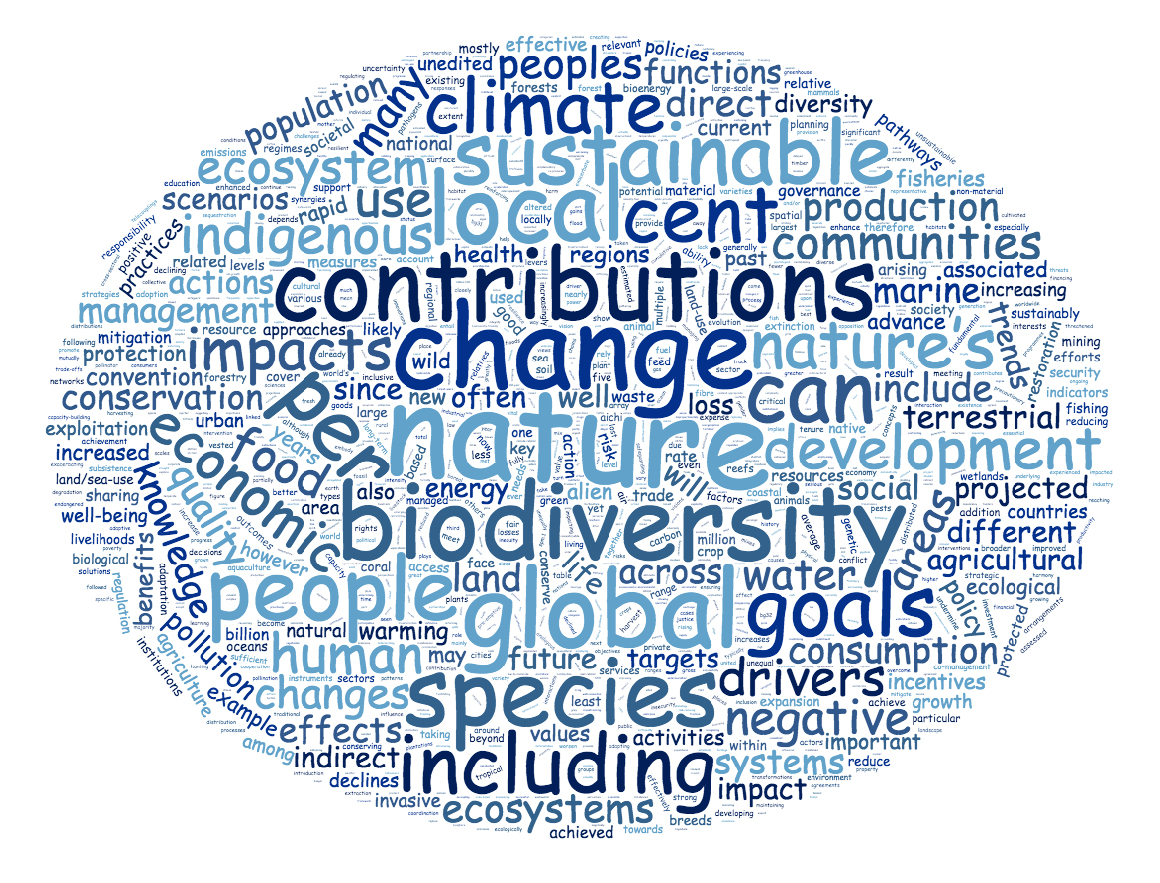 All of this will require excellence in ocean science and the collection of data and information that can support those actions. While the engagement of ocean experts in IPBES could be strengthened, these assessment reports (including the IPCC special report on Cryosphere and Ocean expected later this year) should be discussed widely in the ocean science community as they may offer guidance toward new areas of focus.