Vast Expanses: A History of the Oceans 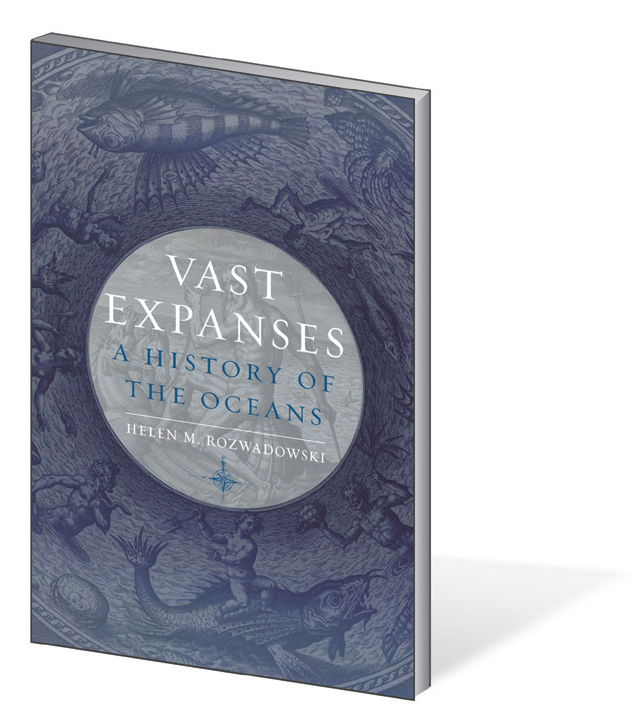 Vast Expanses: A History of the Oceans

Helen Rozwadowski’s Vast Expanses: A History of the Oceans is a concise and sweeping study of the ocean and our varied, changing relationship with it. The book seeks to carve out a role for the humanities in the future and fate of the ocean by defining our historical connectedness with the ocean. It does not offer to provide a definitive history, but instead to proffer a model for writing the history of the ocean that inspires others to fuller, more inclusive works.

In her book, Dr. Rozwadowski draws together our connections to the four dimensions of the ocean, their acceleration under industrialization and globalization, and the mediating role that increasing knowledge of ­­­the ocean has played. The first three chapters are fast-paced, almost choppy, as the author works to cover a lot of ground in a short span of writing. Chapter 1 (A Long Sea Story) covers the biogeophysical history and properties of the ocean, beginning with the arrival on Earth of water bound in interstellar bodies and moving quickly to conclude with the impact of the Last Glacial Maximum on coastal communities. Chapter 2 (Imagined Oceans) introduces the histories and relationships to the ocean of coastal cultures from around the world. Chapter 3 (Seas Connect) charts the growth of trading routes from a coastal to global scales, and accompanying impacts and changes in technology and conventions governing the use of the ocean.

All of the chapters in the book are about 30 pages long, but as the author transitions to covering narrower topics, the narrative becomes smoother. Chapter 4 (Fathoming All the Ocean) explores the discovery of the ocean below the surface, and its impacts on science, industry, and culture. Chapter 5 (Industrial Ocean) reviews the rise of industrial uses of ocean resources, particularly fisheries, and a counterintuitive change in the cultural perception of the ocean as a site of utilitarian economic and geopolitical activity to a place that is timeless, untouchable, and apart from society. Chapter 6 (Ocean Frontier) follows the characterization of the ocean as a new frontier, optimistic visions for human settlement and use of the ocean, and the realized visions of the post-war period from the 1950s to the 1970s. Chapter 7 (Accessible Ocean) explores the growing accessibility of the ocean through aquariums, films, and SCUBA, the rise of the environmental movement, and efforts to protect and preserve the ocean. The epilogue catalogs contemporary threats to the ocean and concludes with a call for the humanities to transform human understanding of the seas to one intimately linked with our history and future and set the stage for positive change.

The book is impressive in its breadth, and all but the most widely read scholars will likely uncover a few historical details that had previously escaped their attention. Writing such a broad yet concise treatise must have some drawbacks, however. First, the book passes over some important and relevant work. For example, there is no mention of Alfred Thayer Mahan, whose writing in the late 1800s figured prominently in the recognition of sea power as a key element of the military and economic instruments of national power that underpin contemporary exploitation of the ocean. Mahanian thinking is infused in contemporary Chinese maritime strategy (Yoshihara and Holmes, 2018), and this has implications for doctrinal concepts such as freedom of the seas, as well as the future relationship between nearly 20% of the world’s population and the ocean.

Finally, although the book intends to inspire fuller studies of neglected topics in ocean history (and did give me cause to think about some aspects of ocean history that would be interesting to explore), it largely covers topics that have already been well described and provides only fleeting hints of overlooked topics that may benefit from fuller study, such as extra-European influences on Hugo Grotius’ Mare Liberum.

Should you, avid reader of Oceanography, read this book? On the one hand, setting out a position for the humanities in effecting positive change in our relationship with the ocean is a noble task. Dr. Rozwadowski, a professor and founder of the Maritime Studies Program at the University of Connecticut, is well placed for this task, and if you want to understand this position, you should read the book. However, the book covers nothing that is new in ocean history, and little that will not already be familiar to those for whom the ocean is a professional medium. If you find the ocean to be dynamic, historically rich, and heavily impacted by human activity, gift the book to someone who doesn’t.