SPURS-2 (Salinity Processes in the Upper-ocean Regional Study 2) used the schooner Lady Amber, a small sailing research vessel, to deploy, service, maintain, and recover a variety of oceanographic and meteorological instruments in the eastern Pacific Ocean. Low operational costs allowed us to frequently deploy floats and drifters to collect data necessary for resolving the regional circulation of the eastern tropical Pacific. The small charter gave us the opportunity to deploy drifters in locations chosen according to current conditions, to recover and deploy various autonomous instruments in a targeted and adaptive manner, and to collect additional near-surface and atmospheric measurements in the remote SPURS-2 region. 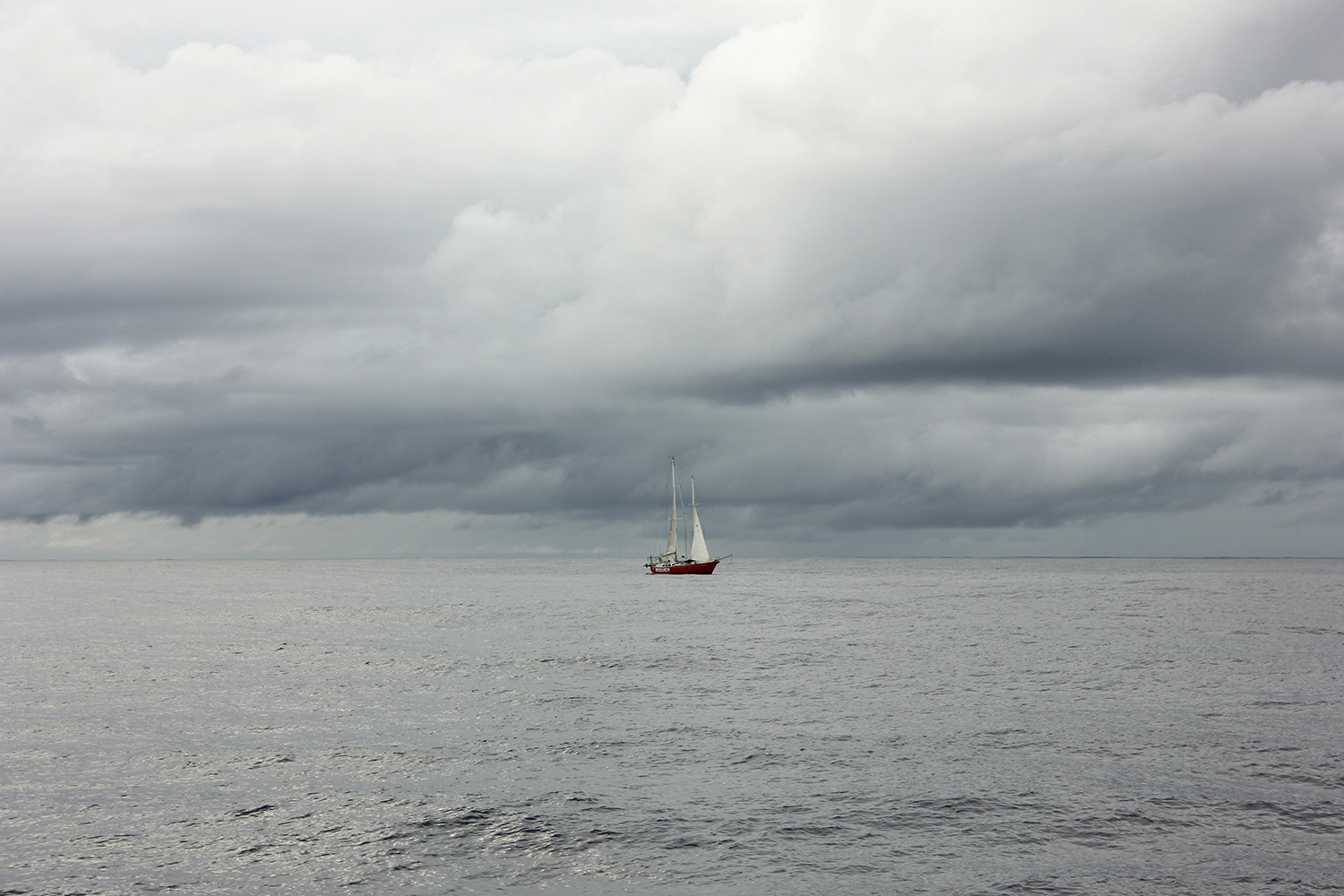 One of the overall scientific objectives of the Salinity Processes in the Upper-ocean Regional Study 2 (SPURS-2) was to capture the structure and variability of upper-ocean salinity, from the small scales associated with rain forcing to the regional scales of the Eastern Pacific Fresh Pool. To ensure comprehensive coverage of this variability, the SPURS-2 field program (https://spurs2.jpl.nasa.gov/) was carried out over one complete annual cycle (SPURS-2 Planning Group, 2015). The deployment and recovery of the moorings in summer 2016 and 2017 at the remote SPURS-2 site (10°N, 125°W) required use of the UNOLS Global Class research vessel Roger Revelle. Other components of the project, including drifters, floats, Seagliders, and Wave Gliders, required more frequent visits by a smaller vessel to deploy, recover, or service instruments. Given the strong and highly variable zonal currents found in the SPURS-2 region, clusters of floats or drifters were quickly swept away from Eulerian moorings. Thus, in designing the operational plan for SPURS-2, it became obvious that bimonthly deployment and/or repositioning of autonomous drifting assets would be important in order to accurately capture the regional circulation.

In order to provide the necessary access, the schooner Lady Amber was chartered starting several months in advance of the main deployment cruise and ending after the recovery of most instruments. Lady Amber is a 20 m research sailboat operated since 2009 by Explorer’s Trust, an independent environmental conservation organization based in South Africa whose mission is to assist with ocean observing and research through cost-effective deployments of floats and other ocean observing infrastructure. Although Lady Amber could accommodate one project scientist at sea, we didn’t take advantage of this during SPURS-2, relying instead on the vessel’s crew.

Our objectives for using Lady Amber during SPURS-2 were to:

This paper discusses preparation of Lady Amber for its eight SPURS-2 cruises and the operational issues that are particular to use of a sailing vessel. We also present an overview of the data from and operations during the SPURS-2 cruises. Our work with Lady Amber demonstrates that smaller, high-endurance vessels not typically used for research can be valuable components of major field campaigns, both for servicing of autonomous assets and for direct data collection.

Lady Amber left South Africa in November 2015, crossed the Atlantic Ocean, and transited the Panama Canal to reach the Pacific and sail up the west coast of Central America. At the start of the program, a team of engineers and scientists from the SPURS-2 program went to La Paz, Mexico, to visit Lady Amber and prepare the vessel for the installation of a suite of meteorological sensors and the Lady Amber Profiling System (LAPS). LAPS and the meteorological sensors were then installed during a dry dock period in August 2016 in Hawai‘i, following the first cruise from La Paz to Honolulu. We provide a detailed description of and results from LAPS and the meteorological sensors below.

Lady Amber completed eight cruises to the SPURS-2 site (Figures 1 and 2) between June 2016 and August 2018. Individual expeditions lasted between 35 and 90 days, totaling 437 days at sea and covering over 61,000 km across the Eastern Pacific. The average speed during transits to and from the SPURS-2 site was about 4 kts (≈2 m s–1), almost exclusively under sail. Motoring was used only to position the ship for instrument deployments and in absence of wind. Weather conditions affected both cruise track and cruise duration. For example, the ship went several hundreds of kilometers north of Hawai‘i at the beginning of cruise 2 to avoid a hurricane (Figure 1). Given these uncertainties, the timing of instrument deployments was generally not known until the ship was very close to the chosen sites.

Because of the uncertainty in cruise duration, the charter contract and costs were agreed on in terms of nominal cruises of 42 days. Given the final number of days at sea, the effective day rate for Lady Amber during SPURS-2 was about 50 times less than that of a UNOLS Global Class research vessel.

During the eight SPURS-2 Lady Amber cruises, 141 Surface Velocity Program (SVP) drifters were deployed, including 78 SVP drifters equipped with salinity sensors (SVP-S; Table 1). Locations for these deployments were chosen to optimally map the regional circulation, as well as to best contribute to the SPURS-2 sensing array. Sequential arrays of drifters offer broad temporal and spatial coverage. In particular, three groups of five drifters were released on September 26, October 3, and October 7, 2016, as part of the Lagrangian array, which was originally deployed in August 2016 by R/V Revelle. The core of the Lagrangian array was formed by a mixed layer float, a Seaglider, and a Wave Glider (Figure 3; Lindstrom et al., 2017).

Following these recoveries, Lady Amber deployed surface drifters at the SPURS-2 central site and redeployed the Wave Glider that was part of the Lagrangian array. Another Wave Glider had become uncontrollable during the previous week, and Lady Amber was able to recover it near 13°N, 123°W—with its subsurface portion missing.

Following these successes and the rescue of instruments that would have otherwise been lost, Lady Amber was out of commission from arrival in San Diego at the end of cruise 3 in January 2017 until early August. During these six months, the crew worked to troubleshoot and repair several major problems with the ship’s propulsion system. Such issues are more likely to happen with smaller nonprofit organizations like Explorer’s Trust than with a university-supported vessel because of the lack of a support network. Most importantly, these long repairs prevented Lady Amber from turning around the Seagliders and Wave Gliders, and deploying a second mixed layer float in March 2017 as originally planned. The three Seagliders, which had been operating since late August 2016, went into an energy-conserving mode in May 2017, executing only a very slow dive once per day. The two remaining Wave Gliders continued to operate normally, despite decreases in maneuverability.

Once Lady Amber was able to sail again, all three Seagliders were finally recovered in late August 2017, a year after their deployments. Because of bad weather (remnants of tropical cyclone Fourteen-E), it was not possible to recover and service the Wave Gliders. Fortunately, the two Wave Gliders survived until the Revelle recovery cruise in October 2017, well beyond the rated lifespan for the umbilicals (six months). The Lady Amber crew deployed two Seagliders on August 30 at 11°20'N during a calm day (dodging squalls).

During SPURS-2, Lady Amber was equipped with LAPS, a system designed to profile temperature and salinity in the upper 2 m of the ocean. It uses two CTDs installed on the leading edge of the keel at depths of 1 m and 2 m, and a floating sample intake deployed from a boom mounted on the bow that pumps water from the upper few centimeters to a thermosalinograph mounted inside the ship (i.e., a salinity snake; Schanze et al., 2014). The suite of meteorological instruments, which included a three-axis sonic anemometer, a rain gauge, a relative humidity/temperature/pressure sensor, and a motion package, was deployed off the stern on a 3 m mast. Pyranometers and pyrgeometers deployed atop the foremast measured downwelling shortwave (solar) and longwave (infrared) radiative fluxes. Wind speed and direction relative to ground were obtained from the relative wind measurements using GPS velocities and ship’s heading.

Comparisons with the SPURS-2 central mooring during overlapping periods confirm that wind speed and the components contributing to the oceanic air-sea heat flux (sensible heat flux [SHF], latent heat flux [LHF], net longwave radiation [LW], and net shortwave radiation [SW]) can be estimated from a sailing vessel (Figure 4). For example, the correlation coefficient between the net heat flux computed on the buoy and Lady Amber during the two-day period shown in the lower panel of Figure 4 was 0.92 (i.e., R2 = 0.85). This is largely due to the large diurnal cycle and the good agreement between the solar radiometers on the two platforms. The meteorological sensors were deployed on the stern for ease of access during this initial cruise and because Lady Amber was expected to sail downwind for significant periods of time. A lesson learned during this initial deployment was that the ship was tacking into the wind for longer periods than anticipated. Although an in-depth comparison between the buoy and Lady Amber was not a main objective of these cruises, we expect flow distortion and surface heating to adversely impact calculations of the bulk fluxes. Therefore, this lesson learned and follow-on discussions with the crew suggest that in any future deployments, we should place the three-axis anemometer and the motion sensors atop the main mast.

Several rain freshening and diurnal warming events were captured with the LAPS during cruises 2 through 7. At the end of October 2017, both Lady Amber (on its cruise 5) and Roger Revelle (on the SPURS-2 mooring recovery cruise) were near the SPURS-2 site. The two ships conducted upper ocean surveys around 9°–10°N, 125°W (Figure 5).

The cost of chartering Lady Amber is nearly 50 times less than the day rate for a UNOLS Global Class research vessel. The Lady Amber crew was capable, but needed to be trained to handle scientific equipment. The equipment load was probably at its maximum during the fourth cruise: three Seagliders, one mixed layer float (not deployed), and 20 SVP drifters. Our experience demonstrates that while much more limited in their capabilities compared to large ships, small and relatively inexpensive research vessels such as Lady Amber can play vital roles in providing access to the deep ocean. During SPURS-2, chartering Lady Amber made it possible to extend the observational period well beyond the main field campaign. Drifters were deployed much more regularly than would have been otherwise possible. We can say without doubt that several instruments would have been lost if Lady Amber had not been able to sail to remote locations, often far from the central mooring, and recover them. The high quality of the data recorded from Lady Amber’s underway system opens the door to many future possibilities for uses of small vessels.

Lower costs mean that small vessels can cover vast regions (e.g., Lagrangian array recovery) and conduct frequent deployments. However, the advantages associated with a small operation such as Lady Amber also come with risks. The turn-around cruise did not happen as planned, and there was a long gap in the autonomous sampling near the moorings because Lady Amber was disabled in the first six months of 2017. Overall, we believe that working with the capable and dedicated crew of Lady Amber provides the scientific community with fantastic opportunities, but flexibility and backup plans are required on both sides. Small charters can play in important role in ocean observing networks. Better communication systems (e.g., a reliable satellite text-based messaging system) would improve the ability to anticipate, track, and react to unavoidable plan changes while the vessel is underway.