It’s a full moon high tide on Sunray Beach in Villas, New Jersey, not far from Cape May, and Atlantic horseshoe crabs (Limulus polyphemus) are emerging from the sea. On this day in late May, female crabs, often with several males attached, make their way inch-by-inch from the bay to sands higher up the strand. There they will lay their eggs. On the previous high tide, many did just that, leaving signs of their passage in tracks in the sand.

Once a year, on full and new moon high tides in May, horseshoe crabs leave the sea and come ashore to lay and bury their eggs far up the beach. Ocean waves expose large numbers of them, however. Migrating shorebirds such as red knots scurry along beaches like Sunray, poking their bills into the sand and feasting on the protein-rich special of the day: horseshoe crab eggs.

Red knots are far from a horseshoe crab’s main worry, however. People are a far bigger one. We take the crabs for eel and whelk bait, and for their copper-based blue blood, used in the biomedical industry for toxin testing.

Horseshoe crabs have been around since the late Ordovician period, some 450 million years ago. Today there are four living species: the Atlantic horseshoe crab in US Atlantic coastal waters and the Gulf of Mexico, with the remaining three found off Southeast Asia.

Biologist Larry Niles of Niles and Smith Conservation Services in Greenwich, New Jersey, wonders how many Atlantic horseshoe crabs can be pulled from the sea before their numbers bottom out. Niles is known for his research on horseshoe crabs and the species that depend on them; before his “retirement,” he was director of the New Jersey Department of Environmental Protection’s (DEP) Endangered and Nongame Species Program. 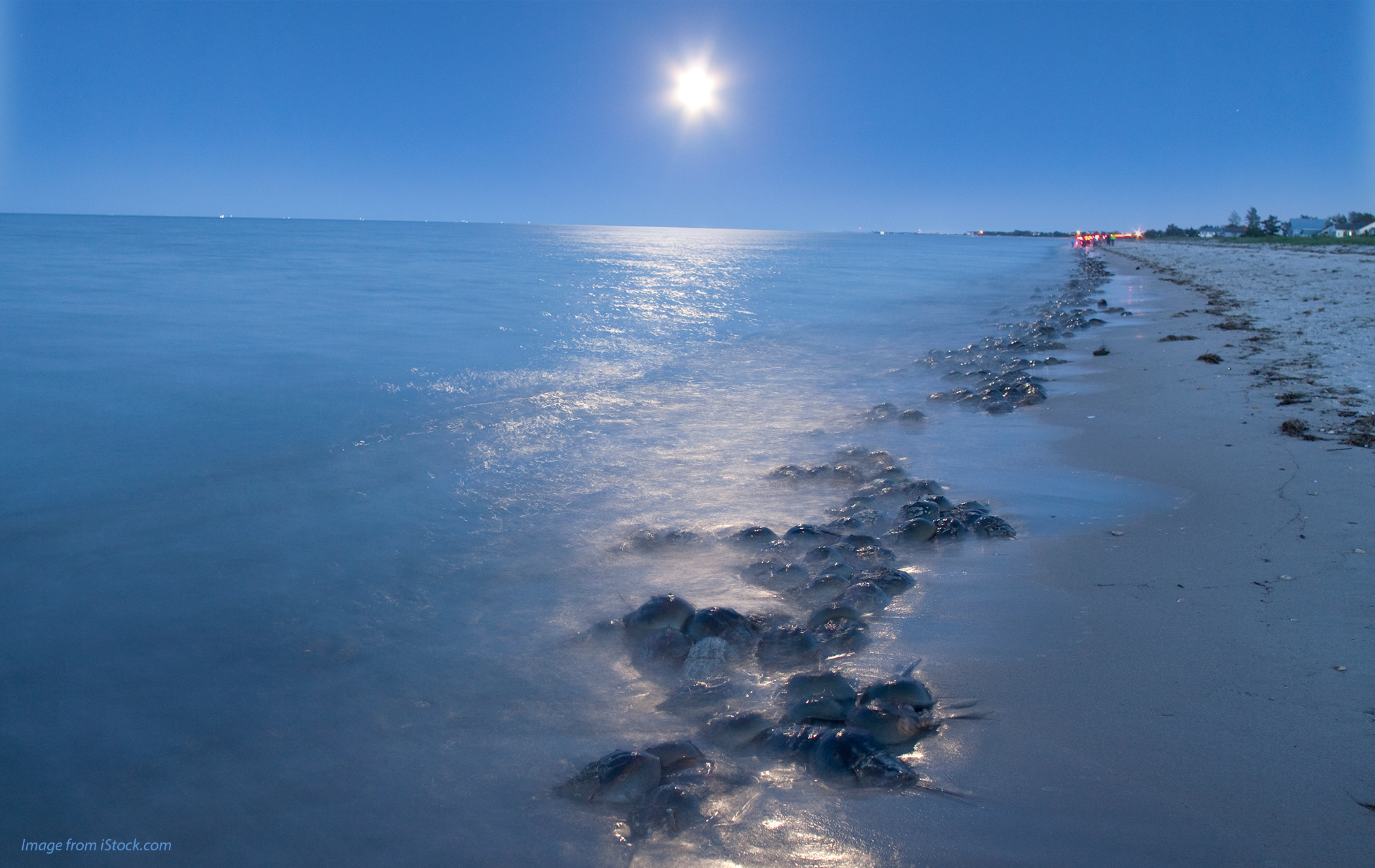 “No turn around,” reads the sign at a crossroads near Fortescue Beach, New Jersey, on Delaware Bay. For horseshoe crabs, this beach and others along the bay could indeed be dead ends. But a ray of hope may be on the horizon.

The taking of horseshoe crabs is regulated by the Atlantic States Marine Fisheries Commission (ASMFC), which has imposed limits on the fishery to allow the crabs to recover. The Carl N. Shuster Jr. Horseshoe Crab Sanctuary, which encompasses waters from south of Atlantic City, New Jersey, to just north of Ocean City, Maryland, also helps protect Delaware Bay horseshoe crabs. The sanctuary is named for horseshoe crab scientist Carl N. Shuster Jr., who conducted extensive research on the crabs.

On the state level, “New Jersey has taken some of the most direct actions in the Mid-Atlantic to conserve horseshoe crabs,” says New Jersey DEP biologist Amanda Dey, including banning harvest of the crabs, the only US state to do so. Since 2008, Dey says, New Jersey has had a moratorium on horseshoe crab harvest despite its allocation of the Delaware Bay horseshoe crab quota.

From the 1850s to the 1920s, between 1.5 and 2 million Atlantic horseshoe crabs were harvested annually for fertilizer and livestock feed, according to ASMFC documents. The harvest dropped through the 1950s and stopped in the 1960s, then began again in the 1970s.

The stock’s current status is largely unknown, say ASMFC sources, due to the lack of long-term data for commercial landings. A 2013 ASMFC assessment, the most recent, shows that horseshoe crab abundance has increased in the US Southeast (North Carolina through Florida) and remains stable in the Delaware Bay region (New Jersey through coastal Virginia). The New York and New England regions have seen a continued decline. The next stock assessment report is due later this year.

On New Jersey beaches, Niles and colleagues found that horseshoe crab eggs once numbered more than 100,000 per square meter. Now that total is just a few thousand. In their heyday, female horseshoe crabs each laid as many as 90,000 eggs during a breeding season. 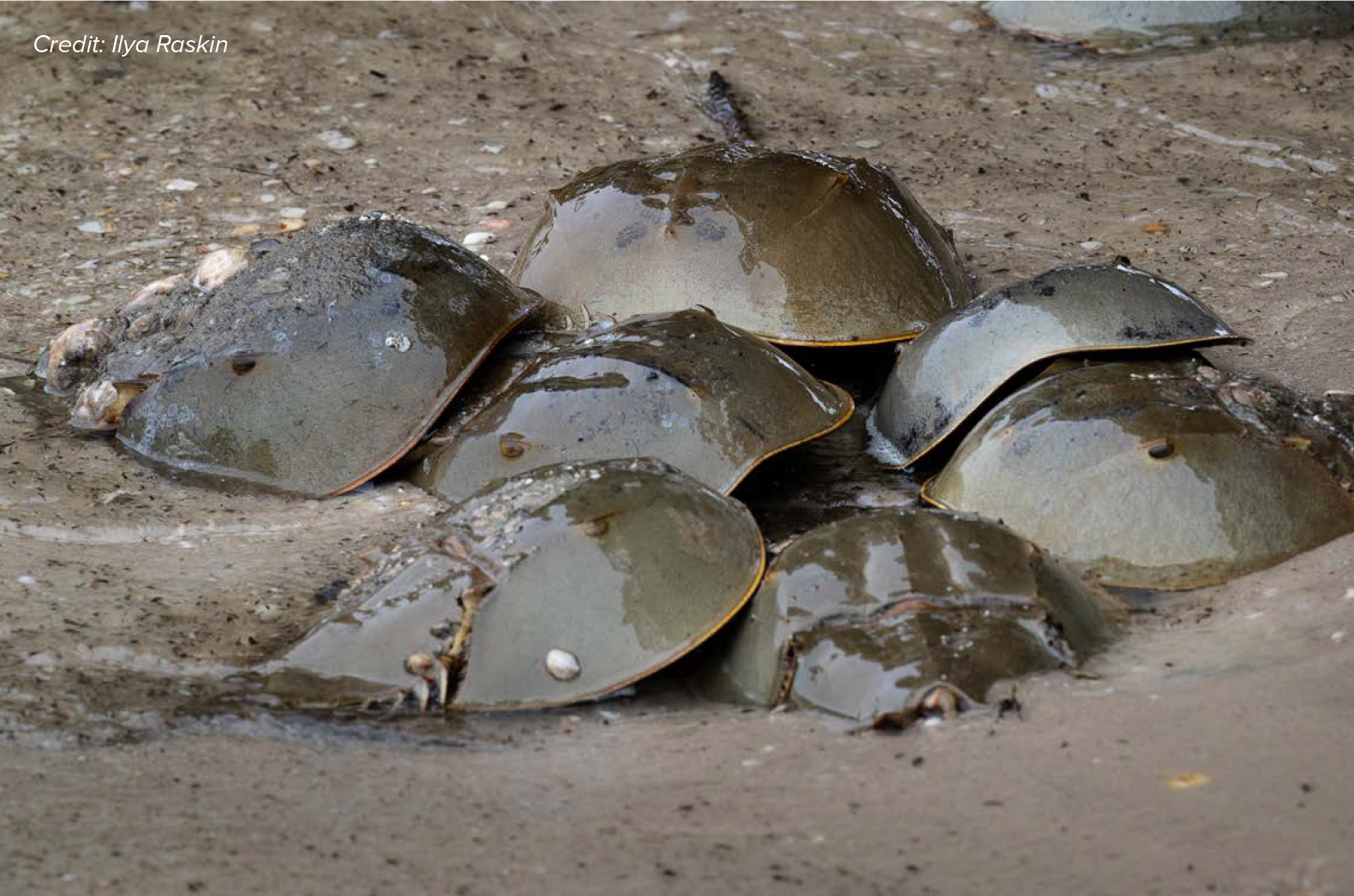 Horseshoe crabs face a larger threat than eel and whelk fisheries: biomedical labs that collect the crabs for their copper-​based blue blood.

The crabs are taken by drug companies for an enzyme, limulus amebocyte lysate (LAL), in their blood, used to test injectable drugs and medical devices for harmful bacterial endotoxins. The endotoxins can cause life-threatening illnesses in humans, including toxic shock. LAL reacts with bacterial endotoxin lipopolysaccharide, revealing the presence of endotoxins.

To obtain LAL, the pharmaceutical industry works through processing facilities, which in 2016 alone amassed some 426,195 Atlantic horseshoe crabs. The crabs are bled at plants like Associates of Cape Cod in East Falmouth, Massachusetts, and Charles River Laboratories in Charleston, South Carolina, then returned to the sea. How many survive? No one knows, but scientists like Niles suspect the number is lower than believed. He and others also question why processing companies won’t share their crab mortality data.

In Asia, where other horseshoe crab species are bled for LAL, the mortality rate is a stunning 100%, according to the Ecological Research & Development Group, a conservation organization headquartered in Dover, Delaware.

The effect of bleeding on Atlantic horseshoe crabs is difficult to track, but researchers believe is likely an important factor in the decline of the crabs and of shorebirds like red knots.

Good news is ahead, however. Pharma-ceutical giant Eli Lilly has announced that the company is switching from horseshoe crab blood for medical testing to a synthetic compound called recombinant Factor C (rFC). Scientists have found that rFC causes fewer false positive results and is cost-effective. The use of rFC is allowed under US Food and Drug Administration (FDA) guidelines. Now the FDA has approved the first drug tested with rFC. Emgality, as it’s called, is manufactured by Lilly and is used to treat migraine headaches.

Findings reported in a May 2018 paper in the journal PeerJ show that substituting LAL with synthetically produced rFC could reduce the use of horseshoe crab blood by 90%. “That’s a lot more crabs left alive,” says Niles. Adds Ryan Phelan, a co-author of the PeerJ paper and executive director of Revive & Restore, an organization that brings new biotech tools to conservation, “Transitioning away from the bleeding of horseshoe crabs to a readily available synthetic alternative is a win-win for crabs and people.”

No Crab Eggs, No Shorebirds

It’s also a win, says Niles, for shorebirds such as red knots.

The first comprehensive survey of red knots on Delaware Bay took place in 1981. Since 1986, it’s been conducted annually by New Jersey DEP biologists, making it one of the longest-running surveys of shorebirds in North America. Red knot numbers have fallen dramatically, from a high of more than 90,000 birds in 1989 to 40,000 in 1997 to about 20,000 each year of this decade. A bright spot is the 2018 peak-count number: 32,930.

The drop of the past 30 years has led to the listing of the rufa race of red knots, which flies along the Atlantic Coast, as threatened under the US Endangered Species Act. Scientists believe that decreased food availability in the form of horseshoe crab eggs has been the main culprit. 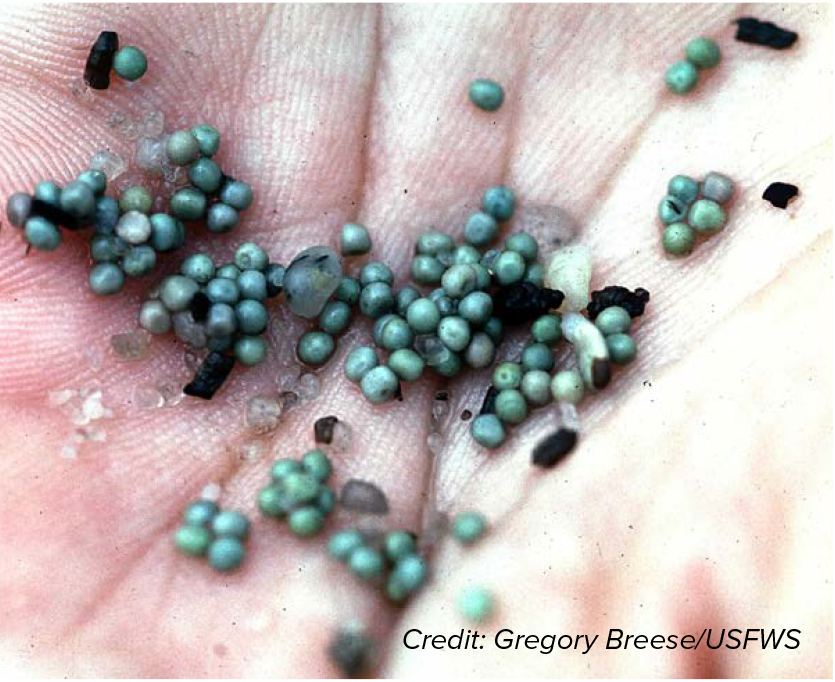 Red knots fly more than 15,000 km from the tip of South America to the Arctic every spring, then return in fall, making this species one of the longest-distance migrants in the animal kingdom.

For much of the year, red knots eat small marine mollusks, shells and all. When the birds temporarily land during migration, however, they dine on fewer hard foods because of their smaller gizzards. Hence, the need for soft horseshoe crab eggs.

Red knots are very thin when they arrive at staging areas such as the beaches of Delaware Bay. During the time between flights, the knots eat constantly to increase their body mass, gaining some 10% of their weight each day.

Delaware Bay’s beaches may be red knots’ most important resting and feeding areas. “The birds land here to refuel on their trek north,” says Niles. “They’re on a schedule to reach their breeding grounds before the summer hatching of millions of insects. All those insects are food for the knots’ young.” 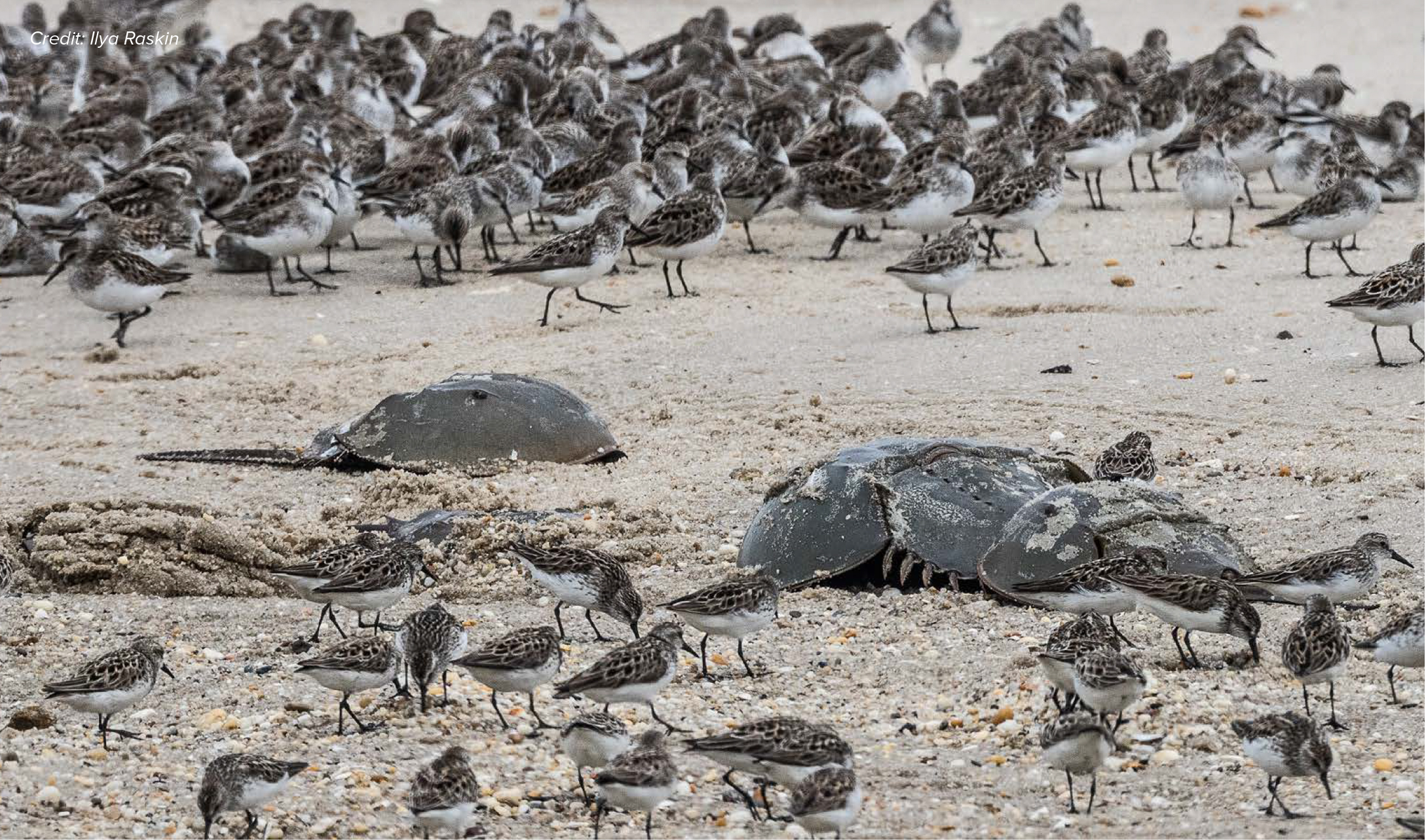 In 2017, some 35% of red knots left Delaware Bay at a weight that would power them to their breeding grounds: 180 grams, or about six ounces. “That’s a big improvement over the 15% that reached that level a decade ago,” says Niles, “but there’s still a long way to go.” Researchers think that 60% is the minimum necessary to return the rufa red knot to its healthy status.

“Red knots won’t get there, though, unless horseshoe crabs rebound,” Niles says.

Although Limulus polyphemus ranges along the east coast of North America from the Yucátan to Maine, “only in Delaware Bay is there a population of millions of horseshoe crabs unmatched anywhere,” states Carl Shuster in The Delaware Bay Area, USA: A Unique Habitat of the American Horseshoe Crab.

How long will the bay retain its status as a haven for horseshoe crabs? The answer, says Niles, depends on how well the crabs weather the presence of another species: us.